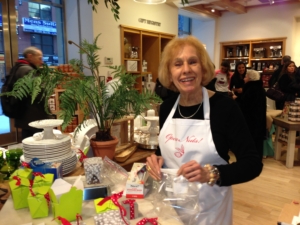 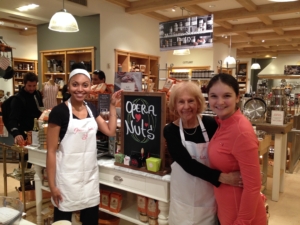 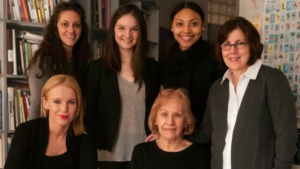 Artist Melissa Cruz has been an OperaNuts supporter since before we launched! She was my Museum of Modern Art contact when I started “Rachel’s Cultural Walks and Talks for Kids.” She then lent a helping (and steady) hand while photographing OperaNuts containers in the museums sculpture gardens. Melissa has just become a homeowner in Pennsylvania, where an endless supply of OperaNuts will appear regularly! Happy New Home. I miss you already.

Actress and model Kim Lockett came aboard after meeting Rachel at a trade show at the Javits Center in New York City. Her sweet, positive nature shone through, and shortly thereafter she joined OperaNuts as a retail associate. She recently moved to Atlanta, where her winning smile will take her places! Good luck, Kim.

Graphic designer/artist Linda Florio works from a studio in Manhattan and joined the team after meeting Rachel in a Chelsea Market wine bar — then meeting again at the American Folk Art Museum. Their mutual love of culture and good food facilitated an instant bond, and after a further meeting at Eataly, Linda subsequently designed the updated OperaNuts logo. We’re delighted to have her! I continue to receive accolades on her distinctive work when I give out my business cards.

Rachel and Eileen met at the New York Public Library on the Upper East Side, where Eileen was volunteering with New York Cares. She answered Rachel’s computer questions—of which there were many! A friendship developed that continues today. Eileen’s interest in medicine led her to the health care field and to an executive position as Head of Partnerships at Wellthy, a caregiving concierge company. Wherever she goes, Eileen shares her generous spirit, good ideas, and strategic thinking. A keeper!

Let’s be honest.  Hiring a web master for my business is an area in which I have NO experience! But after a few interviews, I knew what I didn’t want. Then, along came Steve of F1 Computers. He seemed solid, dependable, trustworthy, and more… When he told me he managed all the technology for the famous Dr. Robert Atkins, whose pro-fat, low-carb diet was so popular in the 70’s, I said, “Your Hired”! Steve is an avid amateur photographer and artisan.